Today was the annual City Dog Reunion. City Dogs is a program that promotes and works with “bully breeds” who are frequently not adopted from kennels.  Let’s be honest, most are pit bulls. In Cleveland, as in many areas of the country, pit bulls are prevalent. Yet because they were, and unfortunately still are sometimes used in dog fighting, the breed is looked upon with trepidation. In addition, any injury by a pittie is going to get media attention. Some cities have a ban on pit bulls, others have rules on fence size and insurance.

The City Dog Reunion consisted of maybe 50 or so pit bulls. Some would think that it would be a melee of fighting dogs, but they were the most well behaved dogs I’ve ever seen. Truth is, pit bulls are great dogs, for those that look beyond the outer shell.

Anyway, Chester had a wonderful time at the reunion, and so did we. There were station/tents set up a good distance apart from each other, and a “passport” you could get initialed when you went to the tent. We got lots of freebies, bought some City Dog stuff, and Chester entered the “most expressive ears” and “best smile” contests. He didn’t enter the “biggest head” or “best trick” since his best trick is getting us to give him more treats. He got lots of loving from the people there, and there were multiple baby pools set up for the dogs to drink from or get in, whichever suited them. I did learn that many of the pit bulls love water; not just drinking but playing in it. Chester really doesn’t like to swim, but he drank and watched the others jump around. There were no fights, and it was a feel good kind of day. All of the dogs were exhausted at the end of the three hours judging from the facebook photos. I know Chester was! All in all, it was loads of fun and a super celebration of “pibbies.”  Yes, they played, yes, they sniffed each other’s butts, yes they ignored each other, yes they rolled in the grass, basically they were just like any other breed.

Chester is 25% pit bull and 25% boxer. The rest is a mix. This qualifies him as a City Dog, but he doesn’t look like the typical pit bull. At one point, a lady made a comment that she “forgets that they have other kinds of dogs than pit bulls” at the Cleveland city kennel. She was being nice, there was no offense taken, but it gave me pause. Truth is, I wondered if others thought we were interlopers, if we belonged. The adopters and other owners were very welcoming, don’t get me wrong. I just wonder in the back of their minds if they assume he is not a pit bull based on what he looks like.

Of course since my mind then takes everything to the next step, I thought about how much we all make assumptions based on appearance. I speak with a lot of people on the phone daily, and many I have not met in person. Our company just added photos to the staff directory and it’s freaking me out a little. The first thing I did was go through and look at the pictures of people I talk to a lot. They don’t look anything like I imagined. I had to pause. Does it matter? I know who is kind, who is a good worker, who is quick to respond, who has a wicked sense of humor and who is frankly, not easy to deal with. Does it matter if the guy I speak with has a beard that would rival ZZ Top? What do they think of me? Did they think I was younger, prettier, more composed, or just the opposite?

Part of the problem is time. To build a good relationship, I was taught there are five “must haves”—time, space, positive tone and words, living in another’s shoes, and being connected. (The Good Life)  I want to think on time for a moment; how much time do we give people? Do we have time to get to know them? Or do we make assumptions based on first impression, then move on. Just like people glance at a pit bull and move on. The inside person may be just like me, but I’ll never know unless I make an effort over time.

This world is fast paced. I get it, my job involves quick thinking and analysis of a situation. I listen to calls to an incident hotline and determine if the situation needs investigation based on the rule and a quick assessment. But the investigators I assign the case to–they spend 45 days with the incident. They will know the person much better than I do. In fact when I go back at the end and read how it turned out, I’m often surprised. I don’t have the gift of time. Yet I think that the world would be a much better place, and I would be a better person, if the visual first impression was just that, a first impression. The thing about first impressions is that often there are no second or thirds. Wouldn’t it be nice if everyone had a second chance? Had time to know you and you, them?

We own a part pit bull. But he’s not like any other doggie, he’s simply Chester. He’s treat motivated, hates bunnies, loves digging squeekers out of toys, likes other dogs, chases cats, and sometimes goes into wild dog mode where he runs through the house at top speed. He’s one of a kind just like you and I are. It’s been a year since we adopted him and it took every bit of that year to get to know him. There are people who we can get to know too, if we take time and have an open mind.

The pictures are Chester at the reunion…he’s tired but happy!  😊 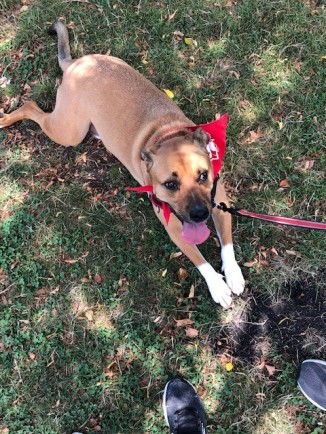 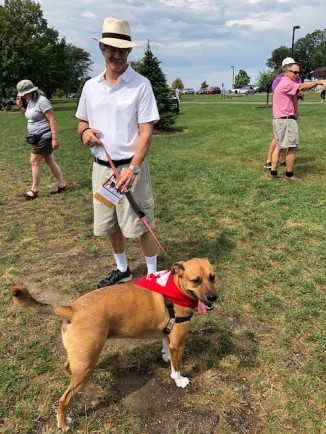